George Carlin said it best – “Have you ever noticed that anybody driving slower than you is an idiot and anyone going faster than you is a maniac?” It defines perfectly the two types of drivers we have in this world, either too fast or too slow. If you’re driving fast, get into the left lane. If you’re going slow, get into the right lane. Isn’t that what we learned in driving school? At times, theses “rules” are abused because of a lack of knowledge of state laws.

Every state has some type of law in place in reference to driving in the left lane. Some, including Pennsylvania and New Jersey, the law says you should only use the left lane to pass or turn left. Below is a map of the entire country, courtesy Vox.com. 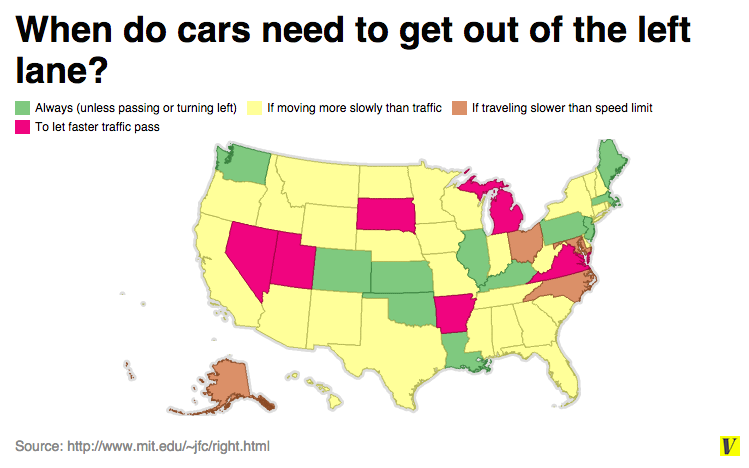 According to recent studies, just a few cars that are driving slow and obstructing traffic cause traffic jams. What ends up happening is a buildup because of slow drivers in both lanes with no where to pass.

There are very complex counter arguments about this theory and statistics that back up claims, and the Vox.com put together below gives it a nice visual experience and can hopefully break bad habits and avoid accidents.